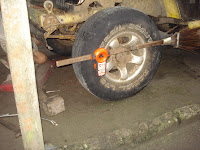 I went for a drive to my favourite mountain, Mt. Arayat (ok technically, it's the only mountain around here) the other day. Managed to hit my Jeep's tie rod (also called track rod and centre link - the bar that holds the two front wheels together) on a rock. It had been hit a few times before but this caused the end of it and it snapped in two, causing one of the wheels to move wherever it wanted, while the other one had "some" steering - if I steered left, it would be anywhere between full left and straight forward. In other words, it totally messed up my "laser aligned" (see picture to the right) steering!
On a muddy track that is not an ideal situation. Despite all of this I managed to crawl up a hill and about 500m to a place I could do some fixing.
This was the resulting bush repair: 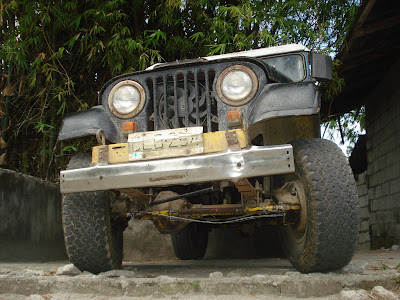 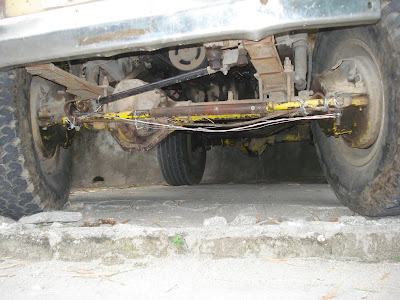 I used an old table leg (the formerly red, rusted pipe in the middle) that conveniently fit over the tie rod (yellow), together with a used concrete reinforcement bar for stability (too thin, but that was all I could find), and copious amounts of steel wire to prevent the structure from pulling apart.

The two bolts going through the table leg and the tie rod inside were later additions. It turned out that although this peculiar contraption actually worked, it had somewhat excessive slack due to the steel wire stretching and the reinforcement bar unbending due to the heavy load from driving off road with it. As soon as I reached a place with electricity I got my drill, drilled two holes straight through the table leg and the bar inside and inserted the bolts. This made it nearly as good as new, although I wouldn't trust the table leg to last very long, so I retired it immediately after these pictures were taken.

I wouldn't say it's beautiful, but it got me home!
Posted by Ronny Ager-Wick at 11:04

New comments are not allowed.