Our 4 year old son is addicted to numbers and counting! 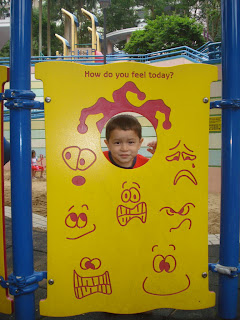 Our son Maximilian, age 4, has become come completely obsessed with counting lately. He has always been obsessed with cars, which in this is a good combination, counting the wheels, number of cars, etc. He's doing this all by himself, without us prodding him, and often when we want him to do something else, like putting his clothes on...
He can now count to 29 in English, and can count from 30 to 39, 40 to 49, etc., but can't remember 30, 40, 50, etc. yet. [EDIT 2013/07/24: He can now count straight to 100 - things move fast here!]
The other day he suddenly said "Seven zero four" while sitting with me in the office. I had no idea where he got those numbers from so I asked. There, he said, pointing on a set of ink cartridges - HP 704.
Now is the time to capitalize on the new-found interest, so I've started to teach him the numbers in Norwegian too. He's fine up to 12 and occasionally gets some of the teens right, but isn't quite as advanced as he is in English. In Kapampangan I think he knows up to 10.

I remember his sister Maxine's time in AMI Maria Montessori Children's House in London and when she had a similar fascination with numbers around the same age her teachers gave her access to all their maths materials, and she did almost only maths related activities for a whole trimester. The next trimester she was almost exclusively practising reading and writing, and hardly touched maths, as her interests had changed. That's one of the beautiful things about the Montessori method - the children get to work on what interests them. Because they want to work with it, there's never a need to teach in the classic sense of the word, or force them to do anything, you just need to show them the maths materials and they'll happily work with them for hours without getting bored. When I say work, that's what they call it in children's house. But the children are having fun while learning and don't really know the difference between work and play - which is how it should be!
If a child misbehaves in a way that disturbs others, something that is quite rare, it is not uncommon to hear a 5 year old say "Please stop it, you're disturbing my work!", and if they persist they may be asked if they'd like to walk a few rounds on the white circle on the floor to calm down - one foot in front of the other, slowly but surely. Amazingly effective according to the teachers. When I get myself a bigger office, maybe I'll make one of those white circles there! Maximilian got to try two trimesters there before we moved back to the Philippines, and I'm glad he got that good start. He loved it from day one, and never looked back when he went in the door every morning.
Now both of them attend OB Montessori in Angeles City, Philippines. It's the oldest Montessori school in the Philippines. We'd prefer AMI, but there's only one AMI in the Philippines and it's in Manila, and that's a bit too long commute (probably 3 hours each way), and we don't want to live there. OB Montessori has, like most Montessori schools apart from AMI, adapted the Montessori method in various ways.

Personally I don't really understand why, as the way Maria Montessori did it, and which she passed down to her organisation AMI, is already very good. I'd say perfect, but perfection is really not achievable in the case of education. But if there is perfection, I'm sure AMI has nailed it. Every single adaptation of the Montessori principles I've seen so far that deviates from the way AMI does it has ended up inferior to the original. I'm not opposed to trial and error, but I'm against taking out the things that work and replacing them with things that obviously don't. A good example is replacing the basic Montessori principle of letting the children play (work) with what interests them at the moment with the proven-beyond-all-doubt ill-conceived and non-functional "traditional" school system of having the school day split into fixed subjects that everyone has to follow.
"Now you have to be interested in maths for an hour, then be interested in English, then be thrilled to have an hour of physical education. After that you should be interested in Geography". The human mind doesn't work like that, and certainly not the one of little children. 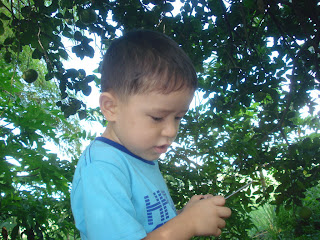 I was quite disappointed to hear that OB Montessori does exactly that from grade 1 and up. At least Casa (Children's House) is not affected. I am really surprised by this given that the owners of the school were educated at AMI in Italy as well as in London. I can only guess why they chose to modify this fundamental principle. My guess is that it's harder to implement and probably more expensive, but I could be wrong here. There may be other aspects, such as the populace not being ready for such a radical change. Regardless of reason, I doubt it was to make the education better. It's almost certainly a compromise of some kind. Granted, it may have been a necessary compromise at the time, but it's still a compromise. I'd love to discuss this with the owners of OB Montessori actually, should I get a chance. I did actually have the pleasure of meeting the founder of OB Montessori, Mrs Preciosa S Soliven coincidentally a couple of weeks ago in their canteen, but obviously that kind of philosophical question was completely out of place there and then. She seemed like a knowledgeable and good lady, and is obviously looked up to by all her teachers and students. She is very passionate about education, that's beyond any doubt, so I'm very curious as to why she chose that way of conveying knowledge to the little brains.
That said, I can't think of any better school to send our kids to here in Pampanga, or anywhere in the Philippines really, maybe apart from the single AMI school somewhere in Manila (providing they follow the same principles as AMI London, and didn't "philippinize" their methodology). Compared to the previous school they went to here, also a private school, supposedly a good one, OB Montessori is not only a huge improvement, it's in a completely different league. I may be obsessed with perfection here, but I happen to like the original Montessori principles, because they were made for the benefit of the children, not for any other reason or purpose. 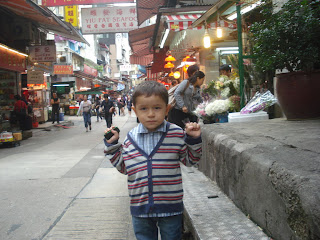 Maximilian got homework last week. Homework in Casa? They're between 3 and 6 years old - what do they need homework for? Not even once did they bring homework with them back from AMI Montessori in London.
His homework was writing letters - two sheets of vowels and one with consonants. Maximilian can recognise most letters, yet he's not very interested in writing, but he's happy to give it a try when I ask him. However he insists on writing a, e and o clockwise rather than counter-clockwise. He needs more practice with the sandpaper letters, I believe. I held his hand to practice writing letter a starting on top right, going counter-clockwise all the way back to where you started, then down and out to the right. I did this a few times and then let him try on his own. As soon as I let go of his hand he was back to clockwise - with the obvious problems this results in (inverted e for example). After writing one a, he started counting "1, 2, 3, 4, 5, 6, 7, 8, 9, 10, 11, 12, 13. Pappa, det er 13!". I got him to write one more. "14, hahaha!" (very happy). I kept trying a bit more, but it was obvious that counting the number of letters was way more fun than writing them.
OK, never mind I thought. This is not the right time for letters. He has a maths period now, I'll just focus on that. I wrote a note to his teacher asking if she could also just let him do maths now that he's addicted to it anyway, then we'll just get back to writing later. Hopefully she will honour Maria Montessori and do just that.

New comments are not allowed.