Philippine customs - unpredictable as usual! But in this case, it's a good thing...

Living in the Philippines is nice, but it robs you of some great advantages more "civilized" countries enjoy, such as predictable customs and postal service.
It's not abnormal for the customs in the Philippines to delay any package for more than a month, while they supposedly check it, without telling anyone. The result of such check could be that they decide to charge you more than the package is worth in fees and duties, or it could be that they just give it to you. They could sit on your package for 6 weeks, or 1 week, or not at all.
If they decide to charge you a fortune in import tax, you can go to them and bargain the fee! I kid you not, it is actually negotiable! Although that sound great, I think the discerning reader can figure out what really is going on - they're just trying to get you to pay as much as possible (which surely they will pocket themselves), with no regard to what the actual customs duty or tax really is. Also, it's not consistently negotiable of course, only sometimes, and sometimes only after you tell them they can shove the package where the sun won't shine...
Whether you get the package right away or have to wait until they've examined it for a few weeks or months, and whether you have to pay or not, seems almost random. I've read that the customs in the Philippines regard any package sent from abroad not the ownership of the recipient until they have released it. Apparently it is a privilege, not a right, to receive packages from outside of the Philippines. They also, apparently, though not consistently, calculate the import tax based on their assumed retail value - not the purchase price. To me, that's the weirdest way to calculate import tax that I've ever heard of!
I have noticed though that lately it has become better. I'm not sure if this is because they've learned that I'm going to put up a fight if their fees are too high, so they don't bother, or if they've actually got some guidelines to follow, including a minimum value, where packages below that value should not be delayed and just forwarded right away. Or maybe the post office here in Magalang, who are very friendly, simply told the customs to stop messing around with my packages as they have other things to do! 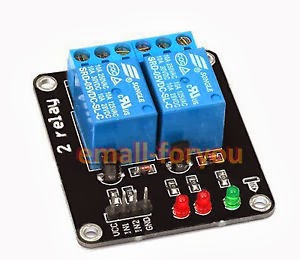 In any case, I am now happy to confirm that for the first time I've received packages from abroad (one from Singapore and one from China) which both arrived only around 10 days after being shipped, using regular mail! They were both low cost electronic components (not consumer electronics, but electronic components that a normal person would have no idea what to do with, or even what they are). That could also be why they didn't bother - they were of no value to them, so there was no hope that I'd just abandon it to them because I refuse to pay their ridiculous fees.
However I'm going to give them the benefit of the doubt, so unless proven otherwise I'm going to assume that the customs have improved and are now on the way to becoming like the customs in industrialized countries. If this is the case, commerce in the Philippines will benefit greatly!
As a result of this positive surprise, I've now ordered loads of stuff from eBay. Obviously, they're all things that I need for my electronics projects, but had delayed for a long while because I was uncertain about what kind of problems I'd get in customs. I will pay close attention to how long each of the packages take to arrive here.
Here's the customs declaration the sender used on the last package I received: 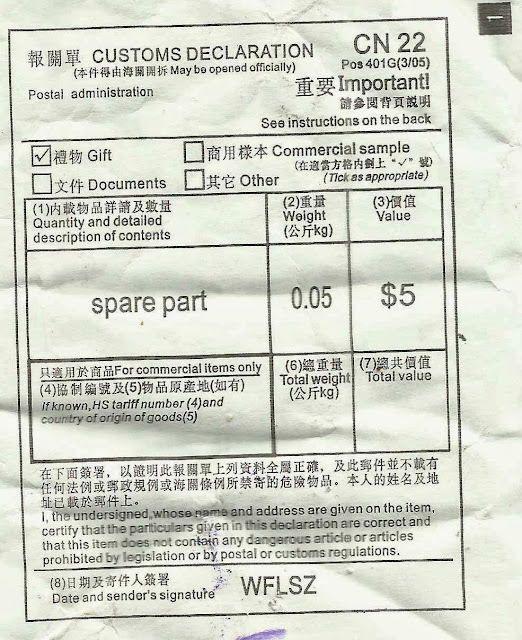 UPDATE (2019)
After the Duterte administrations demands for modernisation of the BOC, they have now raised the minimum amount that will trigger VAT/customs duty from 10 pesos to 10 000 pesos! This means that all packages from abroad valued at 10k or less, there won't be any customs fees or delays.